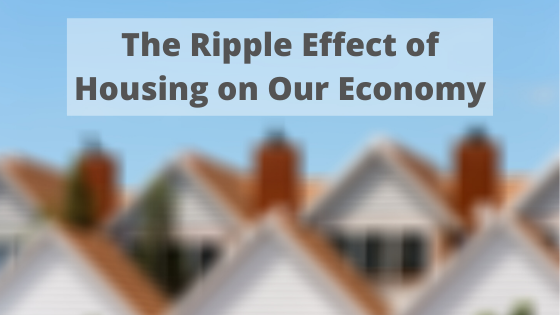 The Ripple Effect of Housing on Our Economy

As states begin to ease stay-at-home orders, communities across the county are starting to see “For Sale” signs planted in neighbors’ lawns again, after a dearth of signs since late February. And as we head into the next phases of re-opening, the conversations will inevitably turn towards the local real estate market, with topics ranging from:

We love to discuss the local real estate market and everyone has an opinion and a prediction as to where the local market might be headed. But investors would be wise to understand the effect that nationwide housing data has on our economy, the markets and by extension, our investments. Let’s explore the latest housing data.

The U.S. Census Bureau and the U.S. Department of Housing and Urban Development compile new residential construction statistics every month and separate the data by Building Permits, Housing Starts and Housing Completions.

While each of those data sets is important to understanding the housing sector, Housing Starts is one of the most closely watched reports because it reflects a very direct commitment by a builder to build.

Think of it this way: as a general rule, home builders don't start building a house unless they can sell it shortly before or upon its completion. And once a local home builder is confident enough to start building, local employment goes up and money is pumped back into the local economy as landscaping is purchased, furniture is bought, appliances are installed and people are put to work.

Now multiply that effect hundreds of thousands of times across the country and you can see the impact that housing has on our economy.

Here is what was reported on May 19th:

There are other data sets that monitor the housing sector and one of them is an index that asks home builders to rate housing conditions and the general economy. Compiled by the National Association of Home Builders, this index is a weighted average of many sub-indexes, including:

THE RIPPLE EFFECT OF HOUSING

While the Home Builders Index data sets might be considered glimmers of hope, the housing industry in general brings a significant ripple effect throughout the rest of the economy. Here are a few examples:

The reason for the decline in prices? Supply and demand. The demand for construction materials has dropped and when the demand for a commodity drops, so does its price (usually).

BUT IT’S NOT ALL NEGATIVE

To summarize, Housing Starts were down significantly, home builders are more optimistic this month versus last month and construction materials have come down in price. But guess what prices are up this month?

If you guessed lumber, you’re right. On the exact same day that the NAHB reported on home builders’ optimism, it was reported that lumber prices have increased by 13% since May 1st, the largest two-week increase in over 10 years.

Why have lumber prices increased? Well, there is now a lot more work being done by the do-it-yourselfers during COVID lockdowns. And they’re buying more lumber. Plus lumber mills have been operating at restricted capacity. More demand, less supply means higher prices.

It’s a lot easier and way more fun to gossip about how much so-and-so is trying to sell their house for, isn’t it?

The opinions voiced in this material are for general information only and are not intended to provide specific advice or recommendations for any individual.

This article was prepared by RSW Publishing.